At the end of January 2019 a Dutch IIBA knowledge session titled “BABOK for dummies ” was so popular a second session (in English) was organised about a month and a half later. Both times the room was packed. What drew such a crowd? What did people take home with them?

When you, dear reader, hear the phrase “BABOK for Dummies”, what do you think of? I personally envisioned the famous yellow books explaining tough topics in layman’s terms. Still, the BABOK (Business Analysis Body of Knowledge) is a book of formidable size - about 500 pages. A lot of contents for the knowledge session’s tight schedule: an hour theory, a break, nearly an hour workshop, followed by networking. Yet, the presenters managed to pull it off. How? By focussing on the core. Let me take you back to the session.
I tend to arrive early at venues and this time was no exception. I quickly claimed a seat at the back of the room and take a good look around. As always, food and drinks were arranged before the lecture. People around me were enjoying a variety of sandwiches in an informal setting while waiting for the lecture to start. When Ed Stekelenburg opened the evening at 18.15, I noticed nearly every chair in the room was occupied. When Martin Bloemendal took the stage, I could see everyone attentively aiming eyes and ears in his direction. 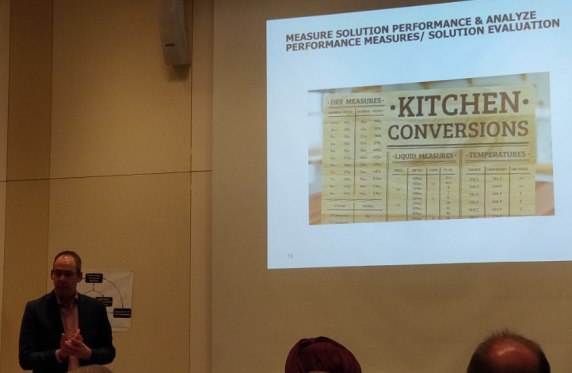 Martin masterfully walked the audience through the core concepts of the BABOK. By presenting the BABOK tasks as tools to renovate a kitchen, the explanations became very easy for everyone in the room to relate to. Video and images moved over the screen as Martin, in essence, explained there is only a very small amount of things you need to learn to connect all the dots and use the BABOK efficiently in your daily work. First, understand your current state, understand your desired future state and understand the risks. Now analyse these using six simple concepts: Change, Need, Solution, Stakeholder, Value and Context. Then think of the six knowledge areas, each with their own tasks, and ask yourself which area you need to perform next to move forward based on the situation you are currently in. If you know and understand these steps and concepts, you know the core of the BABOK.

I listened as Martin used his kitchen renovation example to describe need, place things in context, analyse current state and future state, decide which stakeholders are involved, define requirements, find where the most value lies, weigh the advantages and disadvantages of various solutions, and define risks. All delivered in a light and sometimes humorous way.

After a short break, Katarzyna Kot took the stage to lead the workshop. She opened with a few tips on how the BABOK can be applied, before she asked the room to split up into smaller groups. When everyone had found a team and a theory cheat-sheet, Katarzyna asked all participants to think about what Martin had presented by posing a set of questions. In which BABOK knowledge areas are you active? What tasks do you perform in these areas? Which areas aren’t you active in? Which challenges do you see? After an initial silence where everyone thought about these questions for themselves, insightful discussions started between team members. 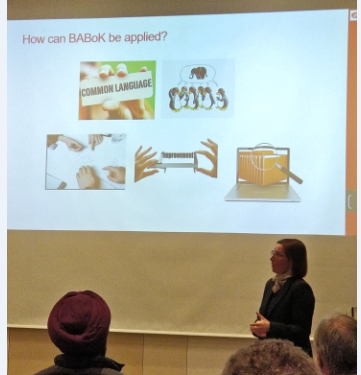 Thirty minutes went by unnoticed and it was all too soon when Katarzyna asked the teams to share their conclusions. What did everyone discover? What would they do after this session?
“Read the book,” came a voice. This received some laughter. To be fair, I knew I would be doing that, too. Another voice rang out: “It is all very personal, so everyone will use the book and perform the tasks according to their own preference. You pick what you think is applicable.” Sounded quite true to me. As for me personally? I think the BABOK helps create structure and helps with next steps if you’re stuck in a certain situation. It can help one connect the dots or see things that may have been missed. More people spoke up, some adding more insights, some asking questions, before the session came to an end.
When the closing applause had sounded and everyone started networking and exchanging contact details, it was clear to me that everyone had found something they were looking for. And maybe even something they hadn’t been looking for but were happy to find. A need had been satisfied.

As I write this, dear reader, I am wondering what your need is. What did you want to walk away with after  reading this piece? Did you find it? Did you find something else of value? I cannot ask for feedback on the platform this piece is posted, but will you come tell me at the next session? I would like to better cater to your need in future writing.

Thank you for signing up to receive our Chapter Communications. We look forward to keeping you informed of Chapter news and events.